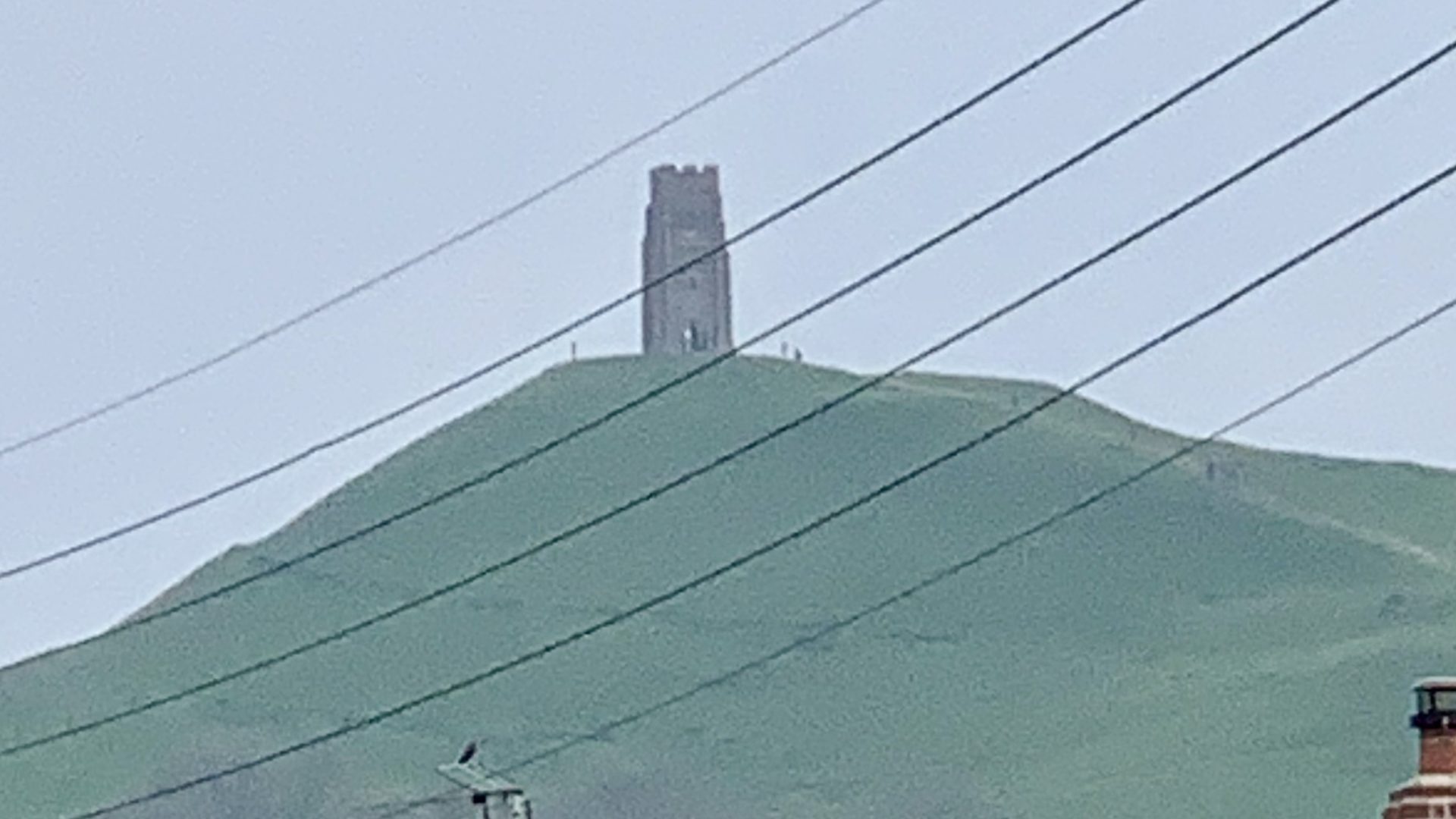 Funny story. Apparently today is May Day. We inadvertently picked May Day (or Beltane, to all you Druid/New-Age types) as the day for our tour of Wells and Glastonbury. Even our tour guide forgot that it was May Day, and that Glastonbury, the ur-New-Age town, would be overrun. And I mean overrun.

They were all in New Age / Goddess / Green Man / faery / hippy wear, because it’s Beltane. Many had matted hair, swishy skirts, there was a guy in a leafy mask, and a woman with elf ears. There were literally hundreds of people marching from the middle of town to the top of the tor together. Before we got to town, we had decided we wanted to hike the tor … right up until we got stuck in traffic behind a pack of people.

We weren’t going to be able to get the bus through the crowd to where we wanted to walk from, and we weren’t up for walking with a gigantic crowd, so we quickly ditched the hiking idea.

We did get a couple of glimpses of the tor, with the remains of St. Michael’s Church rising above it (14th century). My photos are pretty grainy:

Instead, we visited a 700-year-old (or more?) chapel, St. Margaret’s Chapel, where I lit a candle and felt a connection to the unknown numbers of other humans who have prayed there before me and will pray after me.

The we walked through the town. It looks just like Santa Cruz / Sebastopol / Mt. Shasta / Berkeley, but on steroids. (I now know where they got the idea.) There were neverending new-agey shops. It was great fun (although I take issue with the home of the Druids selling Native American dreamcatchers in every shop 🧐).

Our tour guide recommended a cafe called Rainbow’s End, and rightly so. With the town so packed, I was worried there wouldn’t be tables, but enough people were on that hike that we had no trouble getting a table, though it was quite a crowd. I had a gluten free orange chocolate bar that was delicious, and a coffee because we’re still not over the jet lag1.

Because there were just three of us on this tour, the four of us sat around a table and talked while we ate. The third tourist was an older woman from Melbourne who gives tours of cricket grounds, and our tour guide was British. We were all pleased to discover how much we had in common, and how our struggles are the same across such far-flung countries (I’m lookin’ at you, autocorrect). Sure, we’re all white, and we’re all English speakers. But I feel so disconnected from so many of my fellow Americans that connecting with foreigners seemed remarkable.

With the fire at Notre-Dame just a few weeks ago, seeing the damaged and restored Wells Cathedral and the tiny chapel in Glastonbury, I wondered if the people who built those buildings were imagining us coming behind them hundreds of years later. I wonder what they imagined we would be like. To have built beautiful structures in honor of God, they knew that art and beauty are not optional, they’re not extra. Art is central to human existence.

1 After dinner tonight, I napped on the couch for two hours, and now it’s almost 2am and I’m writing blog posts. 🙄